Cleaning up the soda blasting industry one inflatable at a time

Soda and sandblasting, being one of Australian largest industrial service and maintenance industries, has come under recent scrutiny for its negative environmental impacts and inability to be conducted in a clean and contained manner. A large portion of business being conducted by the sand and soda blasting industry is onsite work in open areas, with little ability to contain their polluting media. Given the environmental impact, local councils have recently begun enforcing rules and regulations regarding soda and sand blasting in their areas.

The four main concerns raised by councils in regards to blasting is Air quality, Noise, Water quality and waste management. In the past, most blasting businesses conducted their work in the open with little to no containment, resulting in air quality around the blasting area being greatly degraded by the emissions of particle matter from the blasting. Noise from soda blasting machines and local water contamination are both issues that have been raised by many concerned residence around blasting areas.

Faced with these issues the sand blasting industry, up till now, has been using temporary shelters in an effort to create enclosed and manageable work spaces. Conventional blasting shelters consist of a metal frame and fabric skin, to create an enclosed area that can contain the blasting process within. Although metal frame blasting shelters have proven an effective way to combat these issues, and have been adopted by a large portion of industry specialists, comes with large increases in expenses and important time loss due to the long setup period.

Approached by many soda and sand blasting businesses Giant Inflatables industrial, an Australian owned and operated business, was tasked with reimagining the blast shelter to not only combat the issues raised by councils, but to do so in a safe, affordable, quick and efficient way. Giant Inflatables Industrial, being recognised as Australia’s leader in inflatable temporary structures, immediately took to the drawing board and began work on a rapidly deployable, highly customisable, and environmentally friendly inflatable shelter that could be used by the blasting industry.

After months of research and development, Giant Inflatables Industrial produced the EZY shelter, which is now being viewed as an industry standard and is used by some of the biggest names in the blasting industry. Seimens, a leader in blasting technology and large scale blasting operations, mainly dealing with blasting power plant machinery, have been able to contain and blast without issues and with large increases in productivity, using their two custom built EZY shelters.

Giant Inflatables Industrial Director, David Abramowitch has explained the key concepts behind the revolutionary inflatable blasting shelter; "Through our research and development we identified and solved key issues with the old metal frame blasting shelters, we created a work environment that has exceptional ventilation, more than enough light, and highly effective dust removal, all within a fully contained environment that allows for easy management of blast material." Giant Inflatables Industrial then continued to refine this concept to create a first of its kind inflatable shelter with unparalleled portability and inflate and pack up times of under 5 minutes and 30 minutes respectively. 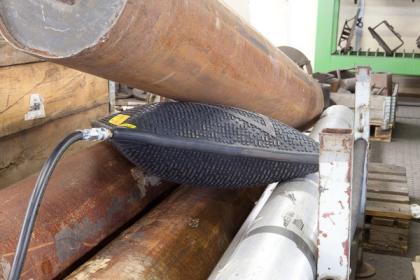 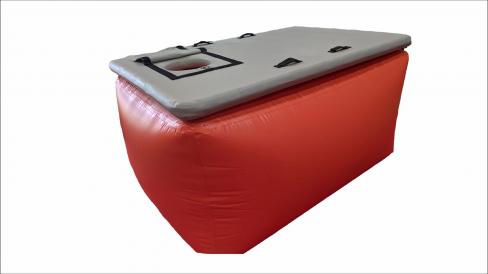 When the traditional industrial, commercial, emergency or civic solutions are not meeting the needs 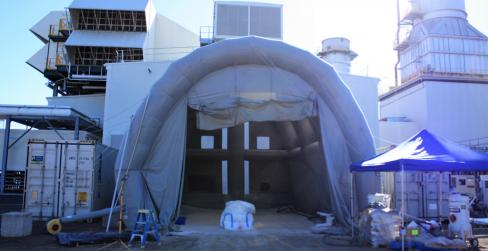 With safety, cost, and time saving at the heart of Giant Inflatables Blasting Shelter that creates a

"I LOVE IT. Looks fantastic, well done. Even better than I imagined, and can't wait to see it in real life. Jase"
- Jason Fair
Read All